Saint-Claude is a French commune of some 10,000 inhabitants located in the south of the Jura département, in the heart of the Jura Mountains, founded at the bottom of a valley at the confluence of the Bienne and Tacon rivers. Not far from Switzerland, Saint-Claude is 60 km away from Geneva and 57 km from Lons-le-Saunier. Saint-Claude, whose inhabitants are known as sanclaudiens or sanclaudiennes in French, is today considered the global capital of pipes. But how did this small town in the Jura Mountains acquire itself such global renown? To understand this, I suggest we take a look at the story of the town and its craftsmen… 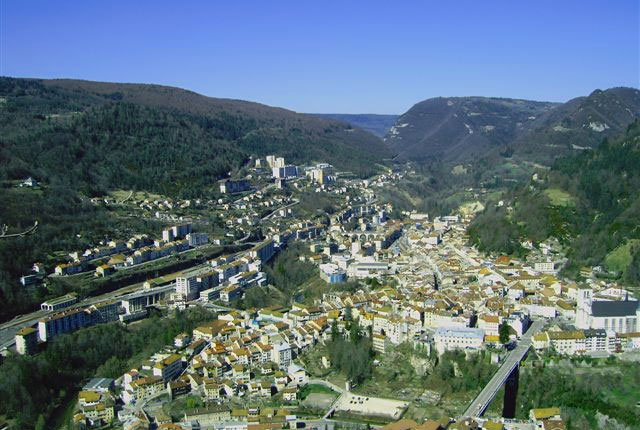 The story of Saint-Claude begins in the 5th century with the establishment of a monastery by two brothers, a monk and an abbot, Romain and Lupicin. These monks were won over by the silence of the place, ideal for prayer and deep reflection. A city was then built around the monastery, which, owing to its location at the confluence of the Bienne and Tacon rivers, was first known as Condat, from the celtic Condate, which means “confluence”.

At the end of the 5th century, the city changed its name to Saint-Ovend-de-Joux, named for the abbot Oyand. In 639, Saint Claude became a monk in the abbey known as Saint-Oyand, and died on 6 June 699. His body was found intact some four and a half centuries later in 1160. The town of Saint-Ovand then changed its name again, this time to Saint-Ovand-Saint-Claude, and became a significant site for pilgrimage. In the 15th Century, Saint-Claude was canonised by Pope Louis XI, the city took on the name Saint-Claude alone and remained a favoured site for pilgrims. 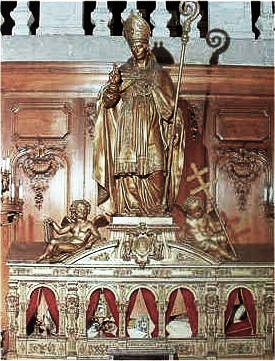 From the crucifix to the tobacco pipe

Since Saint-Claude was one of the stops on the Way of Saint James, the monks, who had been turning wood since the 7th century, began crafting wooden religious objects like crucifixes and rosaries. These monks slowly began training craftsmen, which lead to the establishment of the first wood turning workshop in Saint-Claude.

The craftsmen developed the manufacture of wooden items and widened the scope of their operation by making toys (spinning tops, whistles and rattles), so children and pilgrims could play during their pilgrimages. The number of turning workshops then grew. The main materials they used were wood, bone and ivory.

But with the introduction of tobacco to France, of smoking tobacco in particular, the wood turning workshops adapted by making snuff boxes and pipes made from local boxwood. The pipe craftsmen of Saint-Claude gradually forged themselves a reputation for an unparalleled level of manual skill and expertise. 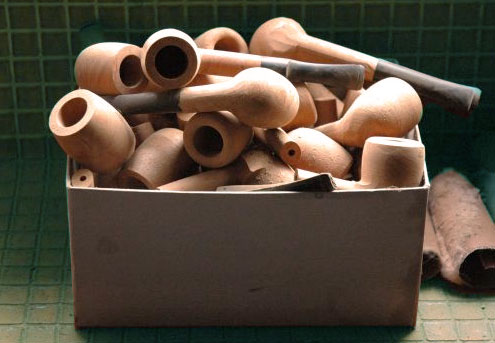 The art of French tobacco pipe-making known the world over

During the 19th Century, smoking pipes from Saint-Claude underwent a profound change. Boxwood had been the wood used to make the pipes until then, but it produced a bitter taste when smoked. Around 1855, a businessman passing through Saint-Claude presented a Saint-Claude wood turner with a tobacco pipe, the bowl of which did not burn, carved from a heavy wood in dark shades. It was the first pipe made from briar. The arborescent briar pipe is highly resistant to heat and fire, giving the smoker the greatest possible pleasure from the plumes of tobacco smoke. The craftsmen of Saint-Claude therefore began using briar instead of boxwood, ensuring the Saint-Claude tobacco pipe caused excitement in the pipe smoking community. The number of workshops grew, with names like Chacom and Butz-Choquin appearing for the first time, while the craftsmen began producing more and more high-quality pipes thanks to their expertise that became globally renowned among pipe smokers. Production became more diverse, with pipes being offered in new shapes and colours, while some craftsmen became master pipe-makers, achieving the ultimate status for a pipe craftsman.

In 1966, Saint-Claude achieved greater renown among the pipe-smoking community with the establishment of the Confrérie des Maîtres-Pipiers de Saint-Claude (The Brotherhood of Master Pipe-Makers in Saint-Claude, set up under the 1901 law) by Edgar Faure. The Confrérie, “the Ambassador for the important Saint-Claude tobacco pipe industry”, promotes the expertise of the master pipe-makers and selects “France’s Premier Pipe Smoker” every year. Edgar Faure was himself made Premier Pipe-Smoker of the Year, followed other famous French personalities like Jean Richard, Nino Ferrer, Michel Drucker, Jacques Faizant, Dominique Strauss-Kahn, and more. For every personality chosen, Paul Lanier (awarded the prestigious meilleur ouvrier de France title in 1991), crafts a pipe that includes a portrait of the inductee, thus perpetuating the tradition of the sculpted briar pipe, numerous models of which can be admired at the Musée de la Pipe et du Diamant in Saint-Claude. The Confrérie today has more than 1000 members in France and worldwide, allowing Saint-Claude to remain a name of great renown.

The story of Saint-Claude and of  French pipe-making continues today with Fumer Chic, where you can find our selection of the best pipes from Saint-Claude with brands like Chacom and Butz-Choquin. There are also a range of foreign pipes to tempt you, from Italy, the Netherlands and Ireland, whose quality means they stand proud faced with their French competition.

And discover our selection from Saint Claude pipes: